Did you know that Lewis Carroll’s nonsense poem, “Jabberwocky,” gave us words that we use today?

The web site “Interesting Literature” recently published an article about the poem’s affect on the English language. Today, I’m sharing part of that article with you,

but first here’s the Jabberwoky poem with a twist
(set to music by the Scottish singer/songwriter, Donovan):

The following is from “Five Fascinating Facts about Jabberwocky” (InterestingLiterature.com)

1. The poem ‘Jabberwocky’ gave us a number of new words which are now in common use. The most famous of these is ‘chortle’, a kind of laugh that is a blend of a ‘chuckle’ and a ‘snort’. But the poem – which was written, of course, by Lewis Carroll – also gave us the word ‘galumph’ (to walk clumsily and noisily) and ‘slithy’, in the sense of ‘lithe and slimy’. ‘Jabberwocky’ may also have influenced our modern use of the word ‘mimsy’, though this remains difficult to determine (‘mimsy’ already existed with a similar meaning, though Carroll’s poem probably helped to popularise it). 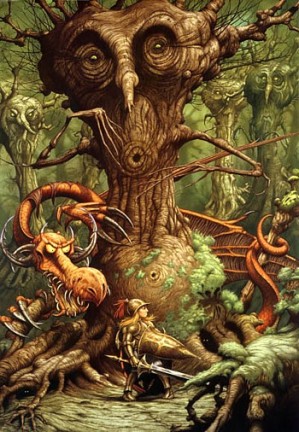 2. Humpty Dumpty, who explains the poem to Alice, also invented another word. The term ‘portmanteau word’ is now used by linguists to describe words such as ‘chortle’ and ‘slithy’ which combine, or blend, the sounds and meanings of two existing words. (Other famous examples include ‘brunch’, from ‘breakfast’ and ‘lunch’, and, more recently, ‘chillax’, from ‘chill’ and ‘relax’.) In Carroll’s novel Through the Looking-Glass (1871), Humpty Dumpty tells a bemused Alice: ‘You see it’s like a portmanteau – there are two meanings packed up into one word.’ A portmanteau is a sort of case or bag which opens out flat into two halves – so Humpty’s use of the term (we hope he won’t mind us assuming first-name terms with him, but if he does – well, he’s an egg, for goodness’ sake) is a sort of metaphorical representation of the two halves of a ‘portmanteau’ word, whose meanings and sounds are then packed up into one unit (e.g. brunch). ‘Portmanteau’, by the way, literally means ‘cloak-carrier’, since the bag was used to carry clothes around.

3. There is a computer program inspired, and named after, ‘Jabberwocky’. The poet and new media artist Neil Hennessy created JABBER: The Jabberwocky Engine, a Java program which can generate neologisms, or new coinages, much in the manner of Carroll’s poem. Random letters are programmed to group together into probable English words. It’s an intriguing idea, though perhaps nonsense poets will be rendered obsolete by the program? We hope not – and we doubt it.