9 out of 10 Writers Have Hypergraphia. Do You? 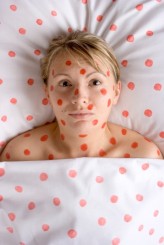 Hypergraphia (a rarely-used noun) means, “the overwhelming desire to write”.

Do you have hypergraphia?

Writing can lead to all sorts of unpleasant conditions. Some writers have graphomania, a manic obsession to write. Others are so obsessed with writing that they practice epeolatry: The worship of words.

If you procrastinate, you are a cunctator, one who puts something off. And if you practice cunctation and put off a writing project long enough, you could end up with uhtceare (pronounced: oot-key-are-a; an Old English noun meaning “lying awake before dawn and worrying.”)

Cunctation also leads to shturmovshchina, a word of Russian origin that means the practice of working frantically just before a deadline.

And shturmovshchina often leads to mogigraphia, a rare word meaning “writer’s cramp”. If you have mogigraphia, you might also have dysgraphia, a problem whereby one finds it hard to write legibly. (Agatha Christie had this, and I do, too.)

Cunctation, shturmovshchina, mogigraphia, and dysgraphia can lead to graphophobia, which means, “a fear of writing.” And if you are afraid of using long words, or even reading them, then you have hippopotomonstrosesquipedaliophobia. (There’s even a song about it! Click here to listen.)

If your brain overflows with ideas and your muse leads you to dream about monsters, you could end up with teratophobia, the fear of giving birth to monsters. . .

and that might lead to ideophobia, a fear of ideas. . .

this blog post may have given you logophobia—a fear of words!

And you thought writing was easy?

Most of these words come from one of my favorite web sites, Interesting Literature. Check it out. I promise, you won’t be disappointed.

Tagged as Hypergraphia, Something to Write Home About, words related to writing

No time to write?
This holiday season, keep your skills sharp
with these quick and fun writing prompts.
Each takes no more than 15 minutes.

Make A List. Check It Twice.
Choose one word or phrase from this tree. Then write the first word that comes to your mind. Don’t think. Just write.

Throw On A Disguise.
Imagine yourself as one of these familiar holiday icons: Ebenezer Scrooge, Santa Claus, a shepherd, The Grinch, an angel .Using that character’s voice and point of view write one paragraph describing Christmas.

Write a haiku poem about one of the gifts in “The Twelve Days of Christmas”.
This one is challenging. Can you do it?  Use exactly 17 syllables.  Arrange syllables in three lines of 5-7-5.  (Share your poems in the comments.)

Finish this sentence:
I can make this holiday season less stressful  for myself and my family by . . .

When I was a kid, Halloween meant trick-or-treating for UNICEF (The “United Nations International Children’s Emergency Fund”). My church friends and I went door to door with our little orange boxes and collected donations to help needy children around the world. Generous neighbors dropped coins into our boxes and—bonus— gave us treats. Afterwards, we went to our church, counted our donations and enjoyed a sugar-filled party. My favorite treat was anything chocolate.

What do you like to eat? Is there something you love munching on while you write?

According to Bon Appétit Magazine, Agatha Christie’s favorite food was cream, Devonshire clotted cream, a thick, butter-like whipped cream she ate with a spoon. When writing, she sipped cream—not half and half, mind you—from a huge mug with the words DON’T BE GREEDY written on its side. Her second favorite food? Apples. She ate them while taking baths.

Emily Dickinson enjoyed baking. She made breads and cakes and, in 1856, she even entered her Indian and Rye bread at the Amherst Cattle Show bake-off taking second place. At home, she liked lowering from her window a basket filled with little cakes to  neighborhood children waiting in the streets below. She often scribbled poetry on the backs of recipes and food wrappers. 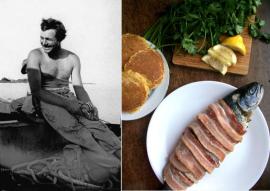 Ernest Hemingway was an avid fisherman. In his essay “Camping Out” he wrote “A pan of fried trout can’t be bettered”. He added his recipe: “Place the trout in the pan (this may require two batches, depending on your luck on the river). After 5 minutes, turn the trout and place 2 strips of bacon over each fish. Cook for another 10-15 minutes, depending on the size of the fish.” He was definitely a foodie, and some of his recipes live on in The Hemingway Cookbook by Craig Boreth.

Norman Mailer had an obsession with oysters, eating them and using the shells to draw on. Another favorite, Häagen Dazs Raspberry Sorbet, he even tried as a salad dressing saying that he preferred its taste to the raspberry flavor from a plastic bottle.

Are you a writer who loves coffee? I am. You’ll rarely find me writing without some sort of flavored latte on my desk. Coffee is an author addiction dating even to the time of Honore de Balzac (1799–1850). Not only did Balzac drink, on average, 50 cups of coffee a day, but he also snacked on whole coffee beans. All that coffee gave him stomach pains. He treated them by going on milk-only diets, but always he came back to his beloved coffee.

Victor Hugo, another coffee fanatic, wasn’t a fan of adding cream or sugar to his coffee Instead, he dropped two raw eggs into the steaming brew and chugged it down!
If that sounds good to you, give it a try:

Tagged as Famous Authors' Favorite Foods, Something to Write Home About