The Little Christmas Book That Could–and Did! 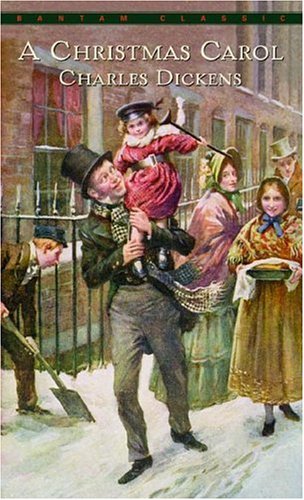 Charles Dickens called it his “little Christmas book,” and he hoped that this hastily penned story could bring in enough money to pay the bills. The checks had stopped coming. Even though Dickens was an established author, work had slowed down.

The idea for his story came on a long night-walk through London. Dickens often walked at night, sometimes 15 or 20 miles, and as he walked he thought about the miserable poor. Many worked so hard, but they had nothing to show for it. On that night, Dickens identified with them.

He returned home, and he wrote. Dickens wrote feverishly for six weeks, laughing and weeping over his characters and his words. When writer’s block struck, he walked it out wandering the streets of London looking for inspiration. He finished A Christmas Carol at the end of November just in time for Christmas.—

In fact, this week, on December 17, we celebrate the 174th anniversary of its publication.

Dickens’ little Christmas book that he hoped could bring in enough money to pay the bills did! It became an instant bestseller. Dickens’ celebrated. In his own words, he “broke out like a madman.”

A Christmas Carol helped to change the way Victorian England celebrated Christmas. In the 19th Century, Christmas was a quiet holiday and not the big celebration that it is today; however, the transformation of Ebenezer Scrooge from a cold miser to a joyful philanthropist encouraged others in the act of giving. It brought joy into the bleak mid-winter.

Just six weeks after its publication, A Christmas Carol was performed on stage, first in London and then in New York. The little Christmas book that could kept on going, and Charles Dickens, the penniless author, became world-famous. The words of his rushed little book lived on in stage productions, musicals and films. A Christmas Carol has never gone out of print—and it likely never will.

Merry Christmas to you, my readers. And God Bless You, Every One.

Tagged as Dicken's "A Christmas Carol"

Lydia Maria Child–Who Was She and What Made Her Famous?

Lydia Maria Child, one of the first American women to earn her living as a writer. You might not know her name, but you know the words that made her famous.

Born Lydia Francis in Medford, Massachusetts, in 1802, she detested her first name and preferred being called “Maria”.  As a child, she received her education in a most unconventional way by an eccentric teacher. James Parton, author of Noted Women of Europe and America, tells us:

“She received the best part of her education from circumstances, rather than from schools. Her first teacher was a certain Ma’am Betty of local celebrity, who was extremely untidy in her habits, kept her school in her bedroom, chewed tobacco, and continually lamented, as the never-to-be-forgotten catastrophe of her life, that Governor Brooks had once seen her drinking from the nose of her tea-kettle. Whatever may have been the other qualities that fitted this amiable lady for the position she occupied, it is at least certain that her pupils became attached to her, and it was their unfailing habit to carry to her a Sunday dinner.

At Thanksgiving, too, she shared the wide charity of the Francis household, where it was the custom at this genial season to summon to a preliminary feast in the large kitchen all the workmen, besides some of the obscurer friends and dependents of the family. Pumpkin pies of vast extent baked in milk-pans were there served to them; a chicken pie of immense size graced the center of the table, surrounded by large dishes containing a profusion of doughnuts, turnovers, and other like delicacies. The little girl was of course present on these occasions to enjoy the pleasure of the guests, and doubtless, also, for she was a healthy, hungry child, to appropriate a few stray cakes and tarts to her own use.

It was at the age of twelve, while visiting her married sister in Skowhegan, Maine, that the idea of adopting literature as a pursuit first occurred to her.”

Maria’s career as an author began with a popular series of advice books for women (The American Frugal Housewife). Later, she wrote historical novels, anti-slavery literature and edited an early American magazine for children for which she earned a steady income of $300 per year. But it was one poem that made her famous, a poem that celebrated her childhood memories of visiting her grandfather’s house on Thanksgiving Day. You know the words. (Almost everyone does!) Here are the first two stanzas:

Over the river, and through the wood,
to Grandfather’s house we go;
the horse knows the way to carry the sleigh
through the white and drifted snow.

Over the river, and through the wood,
to Grandfather’s house away!
We would not stop for doll or top,
for ’tis Thanksgiving Day. . . . 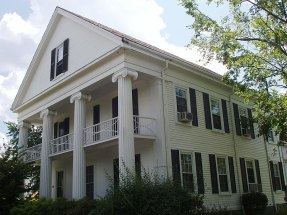 Surprisingly, no one seems to know who wrote the melody for “Over the River and Through the Woods” or whether Lydia lived to hear it. She died in the fall of 1880 at age 78.

“She died in 1880, tranquilly and unexpectedly. Her funeral took place on a half-clouded October day when the ground was strown [sic] with the red and gold of fallen autumn leaves. Her pall-bearers were chosen from among the farmers of the neighborhood, who were all her friends, and as her coffin was lowered into the grave the sun burst forth, and a perfect rainbow spanned the eastern sky.” (James Parton, Noted Women of Europe and America)

The real Grandfather’s house still exists in Medford, Massachusetts near the Mystic River. Sadly, the woods have long since disappeared.

Here is the entire poem:

I hope that all of you enjoy a happy and blessed Thanksgiving!
I’ll see you back here in December.

Tagged as "Over the River and Through the Woods", Lydia Maria Child

Bizarre Facts About the Death of Edgar Allan Poe

What is October without Edgar Allan Poe’s The Raven and The Tell-Tale Heart. You know this author for his macabre works of fiction, but do you know the strange circumstances surrounding his death?

Chew on, or devour if you like, these haunting facts:

Poe’s wife, Virginia Eliza, was also his first cousin. She died at age 24, coincidentally the same age as Poe’s mother and brother when they also died. Two years after Virginia’s death, Poe planned to marry his childhood sweetheart, Elmira Shelton, but on October 7, in the month most closely associated with his grisly poems, and only ten days before his wedding, Edgar Allan Poe died—unexpectedly (of course!).

In the days before his death, Poe seemed unable to think clearly. Elmira decided he looked ill and urged him to see a doctor. The doctor told Poe to put off for a few days a scheduled trip to Philadelphia. When Poe left his doctor’s office he took the doctor’s walking stick instead of his own. Poe had been traveling doing lectures, and he couldn’t remember where he left his luggage. Weeks after his death, one of Poe’s cousin’s tracked down in Baltimore a trunk of Poe’s possessions. Another was found in Richmond.

What caused Poe’s untimely death? We don’t know for sure. One theory is that he had rabies. But the most accepted guess is this:

Four days before his death Poe was found at Ryan’s Fourth Ward Polls on the day of a municipal election. This location was associated with cooping, a form of voter fraud in which unsuspecting victims were drugged and forced to vote at one polling place after another until being left for dead. A few years after Poe’s death a rumor spread that Poe had been cooped. About a decade after Poe’s death, his friend John Ruben Thompson wrote a lecture . . . reporting that being cooped had contributed to Poe’s death. —Biography.com

Poe’s demise didn’t end the creepiness we often associate with him.

• Catterina, Edgar Allan’s beloved cat, died just after he did.

Rufus Wilmot Griswold wrote a lengthy obituary for his enemy that was so libelous Griswold signed it with a pseudonym. The article portrayed Poe as a mad, drunken, womanizing opium addict who based his darkest tales on personal experience.—Biography.com

• Many of Poe’s fans waited in line to snatch a snippet of the author’s hair while he lie in state, but only seven people attended his funeral.

• Edgar Allan Poe was buried in an unmarked grave. Eleven years after his death a cousin paid to have a monument made; however a train crashed into the carver’s studio destroying the monument. Years later, when Poe’s coffin was being moved to a new location, it broke open revealing what was left of his remains.

• And, finally, some think that Poe continued writing after he died.

In the 1860s, the medium Lizzie Doten published some poetry she claimed had been dictated to her by Poe’s ghost.—Biography.com