What Do You See—Something Commonplace or Something Totally Different? 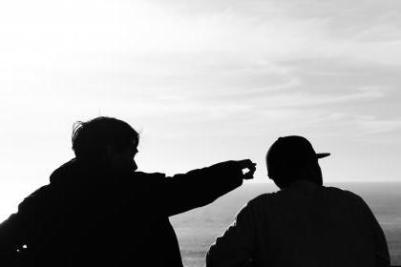 Two authors standing side by side. One might see only what is commonplace while the other sees a great deal more.

This is how the author, Hamlin Garland, saw Greenfield, Indiana in the late 1800s:

“To my eyes it was the most unpromising field for art, especially for the art of verse. The landscape had no hills, no lakes, no streams of any movement or beauty. Ragged fence-rows, flat and dusty roads, fields of wheat alternating with clumps of trees – these were the features of a country which to me was utterly commonplace . . .”

But the poet, James Whitcomb Riley, saw his birthplace, Greenfield, differently. The dusty wooden plank road stretching through Greenfield, the vast, flat farmland with its rickety fences, the scent of buckwheat and basswood . . . . these inspired him to write in the voice of a farmer using a Hoosier dialect sprinkled with 19th century, Middle-Western colloquialisms.

Different things inspire our words. Two writers can look at the exact same thing and see something totally different.

As October slips away, take a walk with Riley and see Greenfield through his eyes: 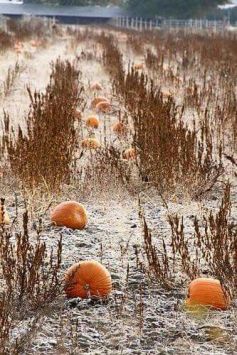 WHEN THE FROST IS ON THE PUNKIN

They’s something kindo’ harty-like about the atmusfere
When the heat of summer’s over and the coolin’ fall is here—
Of course we miss the flowers, and the blossums on the trees,
And the mumble of the hummin’-birds and buzzin’ of the bees;
But the air’s so appetizin’; and the landscape through the haze
Of a crisp and sunny morning of the airly autumn days
Is a pictur’ that no painter has the colorin’ to mock—
When the frost is on the punkin and the fodder’s in the shock.

The husky, rusty russel of the tossels of the corn,
And the raspin’ of the tangled leaves, as golden as the morn;
The stubble in the furries—kindo’ lonesome-like, but still
A-preachin’ sermuns to us of the barns they growed to fill;
The strawstack in the medder, and the reaper in the shed;
The hosses in theyr stalls below—the clover over-head!—
O, it sets my hart a-clickin’ like the tickin’ of a clock,
When the frost is on the punkin and the fodder’s in the shock!

Then your apples all is gethered, and the ones a feller keeps
Is poured around the celler-floor in red and yeller heaps;
And your cider-makin’ ’s over, and your wimmern-folks is through
With their mince and apple-butter, and theyr souse and saussage, too! …
I don’t know how to tell it—but ef sich a thing could be
As the Angels wantin’ boardin’, and they’d call around on me—
I’d want to ’commodate ’em—all the whole-indurin’ flock—
When the frost is on the punkin and the fodder’s in the shock!

Look around.
Take a break from raking leaves
(or whatever else you’re doing).
What do you see—something commonplace
or something totally different?

Tagged as Something to Write Home About, What Do You See—Something Commonplace or Something Totally Different?, writing perception