Which Famous Author Was Born on the Fourth of July? 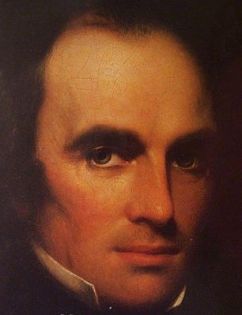 Nathaniel Hathorne, the American writer best known for penning The Scarlet Letter and The House of the Seven Gables, was born on July 4, 1804 in Salem, Massachusetts. (And no, I didn’t misspell his name.)

Hathorne’s great-great-grandfather was the only judge during the time of the Salem witch trials, and Nathaniel’s checkered family past haunted him so greatly that he added at “w” to his last name to separate himself from any association with his grandfather.

When in his thirties, Hawthorne helped found an agricultural commune near Boston. Thinking that farm life would provide him with peace, quiet and plenty of time to write, he soon discovered farming is hard work. Nathaniel shoveled manure, milked cows and baled hay. He left the farm after only a few months, hands blistered and explaining that readers couldn’t expect pretty stories from a man who feeds pigs.

He was no stranger to other legendary authors of his time. Hawthorne attended college with Henry Wadsworth Longfellow, and he lived in houses once owned by two other famous authors, Ralph Waldo Emerson’s “The Old Manse” and also the childhood home of Louisa May Alcott. When Nathaniel and his family moved into “Old Manse” another friend, author Henry David Thoreau, planted a vegetable garden for them. 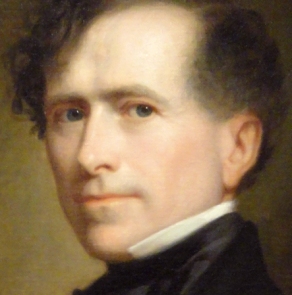 The 14th President of the United States, Franklin Pierce, was also a longtime friend. The two met in college and remained friends for the rest of Hawthorne’s life. In fact, it was Pierce who found the author dead in 1864.

Nathaniel was in the final stage of what might have been stomach cancer when the former President suggested the two of them take a trip to the White Mountains of New Hampshire. Pierce thought the mountain air might help Nathaniel feel better. On their first night in New Hampshire, Hawthorne ate a light supper of tea and toast and went to bed early. Pierce checked on his friend during the night and discovered that he had died in his sleep.

Longfellow and Emerson were among those who served as pallbearers at Nathaniel Hawthorne’s burial in Sleepy Hollow Cemetery (Concord, Massachusetts). His wife, Sophia, and their three adult children survived the author: Julian Hawthorne, like his father, worked as a writer. Nathaniel’s daughters, Una and Rose, both became Catholic nuns. Rose Hawthorne was a leader in her order and took the name Mother Mary Alphonsa. She dedicated her service to helping patients with incurable cancers. She died in 1926 and was buried on the grounds of her order’s Motherhouse. In 2003 Rose was nominated for sainthood. Julian died in San Francisco in 1934.

After Nathaniel’s death, Sophia and 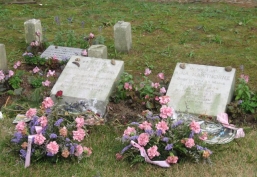 Una moved to London and were buried there after they died. 142 years passed before the Hawthorne family made news again, in 2006, when the bodies of Sophia and Una were moved from their graves in England and reburied next to the famous author.

So . . . .
if conversation lags during your Independence Day celebrations,
you can share these facts about
Nathaniel Hawthorne, American author,
and tell your friends:
“He was born on the Fourth of July!”